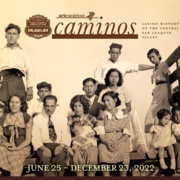 We are excited to be hosting the Caminos exhibit from Arte Americas here at the Tulare County Museum in our History of Farm Labor & Agriculture Museum! This exhibit is on display through December 23 and visitors can view it during our regular hours of Thursday through Monday from 10 a.m. to 4 p.m.

In monthly sessions we augment the exhibit with succinct, informative presentations and panel discussions, led by Professor Alex Saragoza of UC Berkeley, Historian Consultant to the Caminos project. At each session, fundamental questions will be raised that will enrich our understanding of the history of Latinos in the Central Valley.  These sessions will be held on the second Sunday of each month, through December, from 1-3 p.m. in our theater. Seating is limited, so we recommend arriving early.

Below are the topics for each presentation:

September 11 - SEEDS OF CHANGE, EL MOVIMIENTO: Continuities and Change in the Mexican communities of the southern Central Valley, 1940s-1970s

Key questions: How did the experience of the 1930s depression, WWII, the cold war, and the early civil rights movement influence the intense activism of the 1960s and 1970s among Latinos of the south Valley? Why did the rise of the UFW galvanize much of the “Chicano” civil rights movement?  What conditions to a second wave of Mexican migration in the post-1940s era and its implications?  What was the social and cultural life like in the Mexican community of the southern Valley in this period?

Capsule summary: This session will consist of two components, emphasizing the linkages between the Latino civil rights movement of the post-WWII/Korean conflict era and the “Chicano” activism of the 1960s and 1970s.  The session will focus on the ways in which Tulare/Kings counties reflected the political currents that characterized this period, with particular attention to the impact of the United Farmworkers Union and its leaders, such as Cesar Chavez, Dolores Huerta, Gilbert Padilla, among others.  But the session will also note the enduring consequences of the reforms that took place in this period, including those locally that trace their origins to this period, such as Proteus, EOP at COS, and Tulare City’s School District services for bilingual and migrant students. Moreover, the lecture will take into account the growing diversity of the Latino population, as a U.S.-born, more acculturated generation matures in the midst of another surge of Mexican newcomers, fueled importantly by the second bracero program (1942-1964).

October 9 - LA COSECHA, THE ARTISTIC ARC OF THE MOVIMIENTO

Key questions: How did the activism of the 1960s and 1970s influence the cultural expression of Latinos during and after those years?  What thematic elements proved important to the writers, painters, and filmmakers influenced by the impacts of the civil rights movement?  In what ways did popular culture—folklorico dance groups, conjunto music, “Chicano” rock’n’roll, the “Latin boom”, Spanish-language radio and TV—reflect the growing differentiation among Latinos in the U.S., including those of Mexican descent in the Central Valley?

Capsule summary: This session will focus on the artistic bounty generated by the civil rights movement of the 1960s and 1970s and beyond.  This session will emphasize two currents:  popular culture (e.g., mariachi, folklorico, conjunto music, “Chicano”/Latino musical expression); and the arts (e.g., poetry, prose literature, theater, painting and film).  Emphasis will be given to artists from the south Valley.

Key questions: In what ways did the often controversial political and economic changes of this period impact the Mexican community of the southern Central Valley?  What conditions led to another surge of Mexican immigration in this period to the U.S. and its consequences?  What were the social and cultural implications of this new wave of Mexican newcomers?  How did the Mexican community of the Central Valley respond and adapt to this contentious, complicated era?

Capsule summary: This session will be organized around the meanings of the Immigration Reform and Control Act of 1986 during the Ronald Reagan administration and the implications of California’s Proposition 187 (1994), such as the eventual passage of the California Voting Rights Act (2002).  The discussion will take into account the significance of these events in light of the state and national political scene, such as the growing polarization between the two major parties.  In that regard, the session will also examine sources of another, major, but controversial wave of Mexican migration, including its social and cultural implications.  Moreover, this session will also consider the growing differentiation among Latinos in the U.S., with particular reference to Tulare/Kings Counties.

December 11 - MAS CAMINOS: ARE WE THERE YET?

Key questions: What explains the inequalities among Latinos of the Central Valley that still exist and what do they suggest for the future?  While social and economic conditions for many Latinos have improved greatly over time, what measures should be taken to sustain if not accelerate this progress? What are the major challenges facing the Mexican-origin community of the southern Central Valley?

Capsule summary: This session will focus on the socioeconomic gaps that persist among the Latino population of the south Valley, such as educational inequities, income and wealth inequality, rates of incarceration, segregation, lagging electoral participation, among other related topics.  The session will be presented in two components: first, an introductory lecture, and second, a panel discussion with younger members of the Latino population of Tulare/Kings counties region, given the possible meanings of the national mid-term elections.  Introductory remarks will note the recent progress that has been made in various fields, such as the increase in elected officials, professionals in social services, medicine, and legal fields, Latino-owned businesses, the growing number of Latino college graduates, etc.—yet, it is evident that there is much room for improvement in such forms of progress.

Our mission is to protect, preserve, and promote understanding of Tulare County's past and its place in the future by providing the community with innovative, diverse, and engaging exhibits and events.

We are proud members of CreateTC! Click HERE to see our Resolution to Champion the Arts in Tulare County.